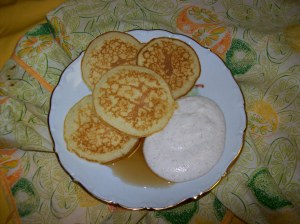 As I mentioned in my 19 July post “SEABLUE-Atlantic City”, I recently visited The Borgata and The Water Club Hotel.  Due to my short stay, I was unable to sample all of the room service breakfast selections.  A few weeks later, I saw a link to a recipe by The Water Club’s Executive Chef, John Johnson for one item on the room service menu: “Lemon Pancakes with Whipped Almond Ricotta and Spiced Syrup” and decided to try it.

For a change, I followed the recipe EXACTLY (though I did not make the spiced syrup).  I like to make smaller pancakes, slightly larger than “silver dollar pancake” size. The pancakes were light and flavorful and the ricotta was a complementary and unique swap out for whipped cream or butter. The lemon was distinctive but subtle, however if you do not like lemon/citrus I think this batter would work well as a base for a variety of different add ins, spices and flavors.

I cooked breakfast for two people and this recipe’s yield could probably feed four to six people, especially with side dishes like fruit or breakfast meats.  I had A LOT of pancake batter left over, so I decided to experiment.  I made as many pancakes as I could from the rest of the batter.  I let the pancakes cool completely on a wire rack and I froze them between wax paper sheets in Ziploc freezer bags.  Two weeks later, on a Saturday afternoon, I removed the packet from the freezer and allowed it to thaw in the refrigerator for Sunday morning breakfast.  On Sunday morning I heated my oven to about 300 degrees.  I placed alternating layers of foil and pancakes on an aluminum baking sheet and placed the sheet into the oven.  In about 15-20 minutes, the pancakes were hot (and much better in texture than store bought frozen pancakes). Little was lost in the freezing process-the pancakes were enjoyable and almost as good as freshly made and clean up was super simple and quick.